Getting Back into the Groove

After a year away from playing it’s been much tougher than I expected to feel comfortable with my decision making process. Some rustiness is to be expected, but I am a little surprised with how far things have slipped. I guess it’s now just a matter of getting organised properly with a proper schedule to refresh all my knowledge.

First order of business has to be sorting out my pre-flop play. Which hands to open isn’t really an issue with 11 years experience; nor is 4/5 betting when playing in such a soft player pool. The biggest issue I’m having right now is 3 betting. With no HUD available, and so many unpredictable players on Natural8 just how wide I can 3 bet bluff isn’t clear. Widening my 3 bet value range seems fairly straightforward, but I need more time to see if the default strategy I used on Pokerstars will work okay on Natural8. If everything goes well then I will post up what ranges I am using to see if they work for other people.

With no HUD, and no hot-keys I’m still stuck with four tabling for the time being. I tried six tables but I was feeling too rushed to be comfortable. This is something else which I expect to improve over the coming weeks; a new 24in monitor will probably help as well, when I get around to upgrading the old thing I’m still using. Four tables and short session times will be a lot better than trying to hammer in too much volume at the start anyway. Quality over quantity.

Two of the best books ever written on poker are Jared Tendler’s Mental Game of Poker 1&2. Two years ago, during a rough spell I was recommended to buy both and do everything I could to implement the advice into my poker life. The turnaround was almost instant, as my mind-set was 1000x more focussed than it ever had been. The “inchworm” process as a means of targeting the right areas for improvement was incredibly effective in organising my study schedule.

The plan is to work through these books to completion before I dig out any other classics, such as Matt Janda’s Applications of NL Holdem. Being a generally disorganised person, one thing which has held me back over the years has been the lack of a solid foundation for my game. Don’t get me wrong, I’ve done a lot of work putting in the hours grinding and studying, but I know there’s a lot of the basic-intermediate concepts that I should have fully mastered by now, and haven’t. Hopefully, now that I have a clear plan to revisit everything that I studied before, nothing will be left out and overlooked.

As I work through the material I will document exactly how I have applied the concepts to my specific situation, taking into account my strengths and weaknesses.

The question is should we, or shouldn’t we? One thing which many players believe incorrectly, is that this benefits one player or the other in terms of pot odds. Well, it doesn’t. The only effect is that it reduces variance. But is this always beneficial? 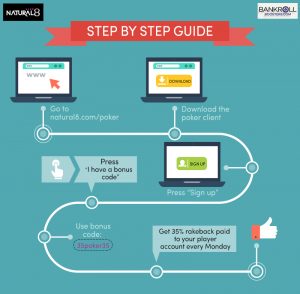 Having thought about this, since I noticed a lot of it going on at Natural8, I still don’t think it’s the best course of action for a player who puts in enough hours to ride out the variance in a short time. Okay, it does reduce the chance that your opponent will not walk off with the whole pot when he stacks off a worse hand, but the fish love it when this happens. It’s a big part of their enjoyment. They also need to get lucky once in a while to maintain the illusion that they’re winning money. I think that regs who do this are kind of needing a mental crutch; variance is not something to be afraid of for a winning player.

Most often seen in live cash games, but on Natural8 we have the option of mimicking the action seen on High Stakes Poker, but should we?

A straddle is a bet from the player to the left of the big blind of twice the big blind before the cards are dealt. In effect this doubles the stakes at play while you are in terrible position with an unknown hand. Hardly something a seasoned professional would be doing. Of course, we have all seen Doyle Brunson doing it on TV, but in live games, or those shown for entertainment on TV, creating action and a gamblers environment is important. For us guys trying to make money online it’s just not necessary.

The only time it appears to make sense is if your table is full of loose-passive callers who will fold too tightly to 3 bets; in that case, there is an extra edge to be had, but I’m not going to get involved with it.

This is just another way for players to run away from variance. I’ve not really got anything else to add apart from that if you feel you need insurance when going all-in, then you’re probably playing stakes that are too high for your bankroll or mind-set.