On the rail – SharkScope launches a collusion detection feature

Many of you are familiar with SharkScope only as a tracking site to check your own stats or others in SNG`s or MTT`s, where they are the market leading third party datamining operator that covers basically all hands dealt across the online poker world in a database.

Those who play or used to play a lot of SNG`s most likely have accounted attempts of collusion on your table, where two or more players play together to better their odds either by soft playing or chip dumping.

This has been a massive problems with especially the double up or nothing type format SNG`s where half the field gets money back.

With the new software SharkScope can indentify when two players have disproportionate winning results in games where they share a table. In any single given game the software cannot detect cheating, but if you suspect something fishy is going on, you can find the players games in the database and click the “Detect Collusion” feature.

After you have done so, it will set of a process where the previous games the two suspects shared a table will be analysed. If it seems like they have in fact been working together the security team of the poker site will be notified, the same option is also for chip dumping. 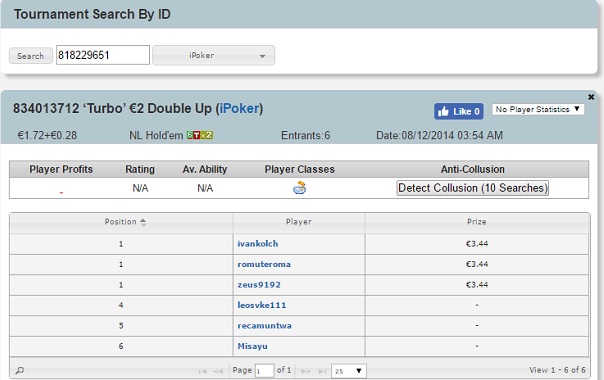 (no collusion was detected in the above picture)