The 888Live tour is now in Rozvadov at King`s Casino right on the border between Germany and the Czech Republic, and wow do they have some treats for us, grudge matches  and livestreaming with one of twitch` finest!

Those who followed the ESPN broadcasts of the WSOP ME this summer can`t have missed all the controversy that was around William Kassouf. Admittedly he was a hate or love character and he got a lot of misaimed criticism on some of the rulings against him. None the less, one of the most noticeable pots he played was against Stacey Matuson where he bluffed her of queens holding the mighty nine-six of spades, upon he exclaimed loudly to the table and those surrounding ‘Nine high like a boss’!

Matuson did after the disappointment of the Main Event settled call Will out for a ‘grudge match’ and they both agreed to play a best out of three HU matches during the 888Live festival in Rozvadov.

And so they did yesterday, where surprisingly too many Matuson won 2-0 in matches and thus crushed Kassouf.

In the interview she did after the matches with PokerNews she admitted to have bluffed a lot, trying to get the better of Will bluffing with 7-high, 6-high.

The event was livestreamed on Parker Talbot`s channel, you may possibly only know him as TonkaaaaP, but he is one 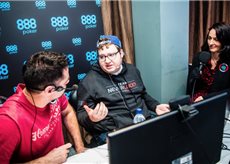 of the most popular streamers on twitch, alongside him in the booth is David Tuchman who is a seasoned veteran in the commentating world, having commented the past six years on the WSOP streamed final tables to mention some.

The pair seems to have hit it off from the get go, and they have a good dynamic between them when they are commentating the livestreams from the 888Live festivals.

Do not despair if you missed some of the streams, the pair still has some more work to do as they are following the main event in Rozvadov, where day 1B is set to start today at 4PM CET.