On the rail – Brains VS A.I

As many are aware of, for the last 20 days a group of four professional heads up no-limit hold`em  players have been battling it out versus the state of art artificial intelligence poker bot called ‘Libratus’. 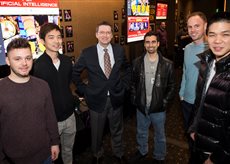 Libratus is an Latin expression and means ‘balanced’, a quite fitting name for a bot for this challenge, and it has been developed by Professos Toumas Sandholm and Ph.D. Noam Brown from Carnegie Mellon University.

The group of players consisted of Natural8 Pro Dong Kim, Jason Les, Jimmy Chou and Daniel McAuley, their mission was to bet the A.I Bot ‘Libratus’ over 120,000 hands of heads up no-limit hold`em.

Another popular name to the challenge was ‘Brains VS A.I’ and when the dust settled yesterday ‘Libratus’ had beat the professionals for  1,766,250 chips, and as they played blinds 50/100 ‘Libratus’ smashed them for an amazing 14,7bb/100, and that is quite a winrate.

Here is how the professionals stacked up against ‘Libratus’ in numbers:

Two of the key points for ‘Libratus’ to win this challenge was that after each day of play, the algorithm built in identified the leaks that the pros had found and exploited, and fixed those before the start next day.

Also a poker bot that cannot bluff, can`t win at poker, but in ‘Libratus’ they have developed a software capable to do so.